IT MAKES YOU THINK

In 3 days time, on Saturday 28th July, I will be exactly the same age my dad was when he died. He was 64 and 2 weeks.
It was no age, we all agreed. He'd been in robust good health despite more than half a lifetime as a smoker of cigarettes and then cigars. About what would be 5 months ago, out in southern Spain in his divorced, retirement heaven, he thought he'd had a stroke. He flew back here and my elder brother and I accompanied him to a meeting with a neurologist who pointed out that as it had come on slowly, it wasn't a stroke. Turned out it was a brain tumour, which they removed surgically, but that was only a secondary to a terminal growth in his lungs.
All 4 of his children were at his bedside as he breathed his last, in the small hours of that quiet night. At least he'd had 3 years of happy retirement. But 64 was not enough. He was very brave  and even turned his back on a lifetime of atheism 10 days before, committing to Christ in quite miraculous circumstances.
He's buried in a still corner of an English graveyard, near Bedford. I have visited it. But not for a long time. And now I've equalled him. Very nearly.
Though we are driving down to Somerset on Saturday!
at July 25, 2018 No comments:

Dear all. I realise I probably made a mistake with my second book, 'A Spring Awakening', in that making it a follow on from the first book, 'A Christmas Calling', which had been so Christmassy and festive and in some ways light, it was too much of a change with the same characters in the same series to have a book so deep in dark and difficult things.
Don't get me wrong! I'm happy with and proud of the second book as it stands, and certainly those who like a more gritty read and engaging with some real, difficult, current issues, enjoyed it - yet even if it haven't been a follow-on but just a second book by me from the same publishers, I think the unexpected change would have been difficult for readers to take.
This is for me, I guess, part of the learning curve of my growth as an author and I have decided, for the moment at least, not to continue with that series into a 3rd and 4th as I originally intended but to look in other directions for what I should be writing next.To my faithful and patient readers I say, bear with me, and even make helpful suggestions!
Thank you!
at July 21, 2018 No comments:

BACK IN THE REAL WORLD?

Hi everyone! Back from a fabulous hot and sunny two weeks in St Malo, Britanny. That's our summer holiday for this year. Now trying to tidy up a new Christmas story manuscript for Instant Apostle #InAp Not part of the previous series - a funny tale about a curate.
at July 03, 2018 No comments:

I NEVER MEANT TO STOP

Such a title alongside such a picture might raise an eyebrow or two. But it's not how it seems, as if I never meant to stop before hitting that wall. To start with, I didn't hit the wall, I hit another car, and then rolled to a stop at the wall. But more than that, the title actually has nothing to do with the car accident. At least, not in the way you might think. 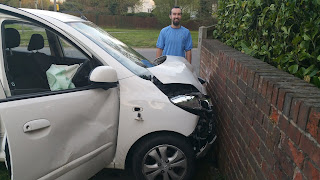 So, to clarify matters, what I mean is I NEVER MEANT TO STOP BLOGGING. I intend to continue to blog despite the dearth of evidence to that effect of late. But I recognise that the major event that seems to have precipitated the lack of blogs since it happened is the car accident.
Tom and I were on our way to the lovely Thames-side village of Cookham on Thursday evening, April 19th. Going along the A40, the traffic lights at a major junction were out. Nobody was coming, I continued over, and then as if deposited from the future, there was this car, right in front of us. The bang was huge, the airbags deployed, and we rolled off the road up to that wall.
The car is a write-off. Neither Tom nor I was hurt except with minor burns from the airbags and aches from the impact of the airbags and the deceleration. The driver of the other car was also unhurt. Insurance decided to pay it out as a 50/50 no fault. Since then I have taken over driving Mary's car, which she was trying to get rid of anyway, and we will hardly need two cars in retirement next year.
But for some reason, since then, I just stopped blogging.
These things can affect you in ways you hardly know.
But here I am again.
at June 03, 2018 No comments:

Shall church bells greet the dawn, the day,And daffodils align the way?The God who came at night, once more,At daybreak steps through heaven's door.So long, the night, of evil's reign.The centuries of Man whose pain, Though made by his own fruitless cause, Cries out for rest and heaven's pause. The gloom of sin, the hidden rooms, From darkened womb to musty tombs. Nor torch nor flame nor speed of light, Illumes the way to heaven's right. So comes The Light that He might be, Snuffed out for me on calvary. Then three days later brights the morn, By standing here at heaven's dawn. Come, church bells, greet the all-new day,And daffodils must line the way. The Lord who shut the dark, will stand,And shine our lives to heaven's land.
at April 02, 2018 No comments:

WHAT DO YOU SEE?

Yesterday, out on my bike, I took this pic of a springy scene. 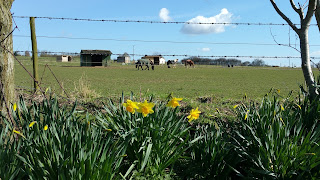 Now, we could leave it at that. Because it's just lovely. Spring has come. But here's something else. Do you see a lovely spring scene of sky, grass, horses and daffodils? Or do you say, 'Oh, pity about the barbed wire, that ruins it'?
Two people sit outside a country pub on a pleasant spring evening. Across the other side of the lightly-trafficked road is a cricket ground. One person looks with great pleasure at the grass, the people walking their dogs, the sky, the nice houses; they feel the gentle breeze, hear the singing birds, sip their drink and find a moment of joyous perfection. The other says, 'Oh I can't stand that road! That traffic! It spoils the whole thing for me.'
The question is, what are you set up to see? Do you always spot the barbed wire and the traffic, or do you see the grass and the sky?
Are you an appreciator or a criticiser?
at March 27, 2018 No comments:

IT MAKES YOU THINK

Chris Cottee
This blog is my author page, with all sorts of posts about writing, my poetry, and observations on life in general, and people in particular!